Filter products
74 items sort by:
Page
1 2
of 2
Your selection:
delete all filters 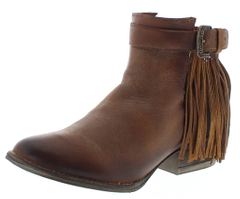 On a trip to Mexico, Corral founder Othell Wellch was really taken by the high quality of handmade cowboy boots and this gave him the idea of creating his own brand of Western boots. With assistance of contacts made in Mexico with boots producers and with the support of his family, Wellch founded his company Corral Boots in 1999.

Initially Corral produced mainly men’s boots made of exotic leather just like most of his competitors in the Western boots market. To differentiate himself from other boots producers and tap into a new market, Corral started to include Western boots for ladies in his range from 2000 onwards. This proved a good decision, as a short time later Corral Boots celebrated huge success with his ladies range and expanded from Texas into the entire United States. In 2006, Wellch sold part of his company to his Mexican business partners to make a name for his brand in Mexico too. Nowadays Corral has more than 500 employees in America and Mexico and is carried by more than 800 retailers in America.

With the regular introduction of new Western products and designs for men and women Corral Boots has made a name in the industry and no longer just stands for a brand, but actually for an authentic Western lifestyle.

Thanks to Wellch’s unshakeable values in terms of quality, Corral Boots has now become one of the leading brands in fashionable cowboy boots. Only the most experienced shoemakers produce the boots for Corral and only use top quality leather from cattle, ostrich and crocodile, to ensure the highest quality standards.

Whether classic or trendy – The right boot for every occasion

Corral Boots will enchant you with cowboy boots for every occasion; classically decorated in brown, black and burgundy, with delicate embroidery and decorative sewing in trendy colours like turquoise, purple and pink. The Western riding boots with Indian patterns are a special Corral highlight.

The Cowboy ankle boots feature a unique design and have fashionable eye-catchers of rivets, fringes and buckles.

With Cowboy boots and Western boots from Corral, you will always be properly dressed.

Classically combined with jeans and a blouse, you can wear top-quality leather boots from cow/crocodile and ostrich leather in a casual Cowboy style. And with the Western riding boots, you will be a real eye-catcher, both at the track and in the city.

Whether it’s a dress, mini-skirt or jeans, the fashionable western boots and Cowboy ankle boots with trims in trendy colours enhance the robust, transparent looks with no compromise on the feminine charm.

Festival time is boot time and Native American patterns are bang on trend. Playful in a dress or casual with jeans hot pants with Western boots in the ethnic look, the festival summer can begin. Forget about flip-flops, ballerinas and bruises on your toes. These are totally practical when dancing in a crowd.

The lovingly crafted boots from Corral Boots will make your individual Western look complete and simultaneously highlight the fashion aspect. Never have you been closer to the Wild West in Germany.